kimono in the forest. An unforgettable memory!

I received some beautiful pictures from Helen, a lucky owner of a Bartok design`s ofuro.
Here is her story:
When we travelled in Japan in 2013, we never stayed in hotels, but in Airbnb’s (of course, the price too is favorable) and once in a ryokan (in Nara). This gave us the best of all our Japan experiences on that summer!

We stayed with an elderly couple in Okayama prefecture, and I asked the woman (no English, just body language:) to show me how to tie the obi, as we had bought some old kimonos at the market in Kyoto.

This led to the most beautiful experience, as she was so engaged and happy for our interest, she collected all kimonos she had, showing them (her daughter is a textile artist, and had made a masterpiece of a hand painted kimono as an art project) and dressed us up – I think the pleasure of this was indeed mutual.

Then she persuaded us to wear them during a visit to a special restaurant in the forest, very traditional – and there we all sat, on our knees in our kimonos, eating all the strange and beautiful dishes. We will NEVER forget it.
Well, now you got this long story (just an example, I have got so many!)…sorry for this! I just feel so passionate about making this kind of experiences available, as I enjoy them so much myself!
Good luck! I look forward to follow the project!
(see all the splendid pictures here below)

END_OF_DOCUMENT_TOKEN_TO_BE_REPLACED

As you know, there is nothing more soul-destroying for us here at Bartok design than to see old Japanese homes and gardens destroyed in the name of blind speculation. From time to time we hear about the impending doom before it happens, as in the case of this spectacular garden in Nara prefecture (east of Osaka).

We’ve been given the opportunity to share these pictures and we hope that with will be able to re-home some of the ornaments or even some of the plants.

We cannot say for sure how old these items are but we hope to bring more information to you soon. If you are interested in being kept in the loop please contact me via email (urgently) japan(at)bartokdesign.com

END_OF_DOCUMENT_TOKEN_TO_BE_REPLACED

MEMOIRS OF A GEISHA

We are deepening our relation and collaboration with the kimono designer Yoshio Jogan.
Jogan sensei is based in Kyoto and went through the long and steep path of mastering traditional kimono patterns since his youth.
But he believes that Art must always be in movement and the worship of a mummified tradition is not going to keep the Art alive.

Jogan sensei is a master in bridging the subtle traditional knowhow of kimono patterning into interior design, contemporary products and computer art. We will talk more about Jogan sensei in the next few weeks, but here I would like to anticipate a news that is also going to impact our Wakayama pre-war mansion re-branding project.

END_OF_DOCUMENT_TOKEN_TO_BE_REPLACED

Nestled in the Swiss Alps

With the email subject line from our client “At last the bathtub is in place” we could appreciate the hard work and effort that goes into redesigning a bathroom. Importing an ofuro from Japan takes no small effort and a huge amount of trust that we are going to get it right.

But get it right we did. Look at this stunning bathroom with it’s outlook on a mini version of the Swiss Alps (or so we like to think, since the bathtub is in its new home in Switzerland). Hats off to the designers of the bathroom who have managed to create a calm and relaxing space that I am sure the owners will love for years to come.

Can you imagine slipping into the delicious hot water after a day on the slopes?

Thank you F.H in Switzerland.

a house for the arts – idea competition

Finally, my prayers seem to have reached some sensible ears up in Heaven…!

An enlightened owner inherited a high grade and extremely well preserved house in Wakayama. The house is a 1,400㎡ (mostly 1 story, 2 rooms on the upper floor) timber frame house on a 3,100㎡ lot.

K-house is relatively new (1940) but being pre-war, it belongs to a sensibility, culture of material and aesthetic sense that unfortunately is now lost and unknown to post war architecture.

I am not being nostalgic: it is an evaluation based on the virtue of the design elements: knowledgeable but with a scent of fantasy.
If you look at the photos below (↓) you will agree that the sukiya-zukuri style in the Taisho and early Showa period is probably the highest point reached by Japanese architecture. The materials are selected with respect for their features. There is wit and irony. Nature mingles with architecture and even penetrates it as branches become railings and full moons become windows.

END_OF_DOCUMENT_TOKEN_TO_BE_REPLACED

Our customer James sent us a fun video of his cat contemplating diving in for a soak in the ofuro. Thanks for the giggle James! Ofuro fun for the whole family. You can see it over on our Facebook page. It’s a beautiful bath, so tranquil.

Send us your pics! We love them!! japan(at)bartokdesign.com is our email address.

According to the client, the installation is still incomplete: the shower glass partition is missing and the faucet inside the spout needs to be modified. Also the lighting fixtures are still missing – but since the boreal spring provides some light until late in the evening, the ofuro is already operational.
Well, this space seems already PERFECT to me !
I cannot imagine how it will be when it is complete with all the bells and whistles!

According to the newspaper it’s popular among tourists to hike the Nakasendo trail between Magome and Tsumago post towns. We opted for the easy way – rented a car. But still, the views were stunning and having a car afforded us the opportunity to see more than just the trail towns.

The Nakasendo is an ancient foot highway that connected Tokyo (or Edo as it was known then) with the rest of Japan to the west. Follow the whole road and you will eventually arrive in Kyoto. It dates back to the 1700s.

Our interest in this area stems from two things: we enjoy learning about and appreciating Japanese history; and we are enamoured with the forests of Japan. The portion of the Nakasendo which is best preserved is in a geographic area called the Kiso Valley. In this area you will see the massive forests of conifer trees, Japanese hinoki (Chamaecyparis obtusa), sawara (Chamaecyparis pisifera ). These are just two of the Five Sacred Trees of Kiso which are favoured by bathmakers.

We started our trip in Nagoya, which is centrally located between Osaka and Tokyo. It made a convenient meeting point for our party of three. Getting an early start towards Gifu prefecture was made easier for being only an hour or so away.

We took an express train from Nagoya station to Ena station. We had arranged to pick up our car from Ena. The map showed where the rental place was but we were not sure if it was walkable or a taxi was a better idea. Calling into the Ena Tourist Information centre gave us our answer (taxi) and a whole host of other information.

Following the advice of the Tourist Info Centre, we spent the morning walking along a part of the Nakasendo that isn’t as well preserved as what we would later see, but still a nice stroll with enough interesting facts to get us excited about the rest of the trip.

After lunch, we took in the view from the Shinonomeo Bridge, which overlooks the Kiso River. With free parking nearby and quite an elevation, this was a great tidbit to learn.

You can see how high we were because look at the tiny car on the right! And this was our first glimpse at the forests!

Our next stop was the ruins of the Naegi Castle. This time we were immersed in the forests and got to experience the feeling of shinrin yoku briefly (forest bathing), although being a public holiday it was busier than usual.

The short hike from the carpark was worth it. Look at the views over the Kiso Valley! Look at the trees!

The first post town of significance we visited was the beautifully preserved Magome Juku.

Our next stop was Tsumago Juku. One of our favourite places was the old school – built from wood of course! It closed in the late nineties.

A lot of effort has gone into preserving this area and piece of Japanese history. According to Wikipedia the area prospered until a major vehicle highway in the area bypassed the towns. Facing demise and economic ruin a few of the towns’ forefathers elected to renovate the old houses and buildings. In 1987 the central government granted them historic status.

This whole area is fascinating especially if you’ve come to Japan and are hoping to see some history but are feeling overwhelmed by the number of temples and shrines. The Nakasendo / Kiso Valley area is very much a piece of history with roots in commercialism – the trade routes of Japan. It makes for a nice change of pace because it’s more recent history than the temples which date back thousands of years. It’s actually possible to imagine walking along these routes, stopping for a night in a ryokan inn, grabbing a plate of local soba. I highly recommend you visit!

In my next post I will talk more about the trees, forests and how important they are both now and then, to the ofuro makers, such as Bartok design.

If you are interested in tracing our route please take a look at the custom map I created on Google maps of our stops. I am more than happy to give more information on anything. -Jacqui (Bartok design team member)

Please note that next week the spring holiday break called “Golden Week” will start. This year our holiday is particularly long on the occasion of the celebrations for the new emperor, taking place of the father who has abdicated. The new era Reiwa begins on May 1st.

If not, all bank processing and shipping will happen after May 7th (5/7). Thank you for your understanding.

HANAMI and JAZZ in Kameoka (LIVE!)

If you are in Western Japan this saturday 4/6, you cannot miss the Hana-mi event organized by Nakagawa Juken at the model house in Kameoka.

Here you can meet with people who fled the cities and are now living in a ko-minka AND you can meet with those who are getting ready for the big jump: the people who are longing to live in an old traditional house in a natural but culturally stimulating environment and are looking for the right timing.
But you can also come to hear Makoto in concert (former top level Geisha in Gion and now acclaimed jazz singer)
And yes, even just those who want to eat heart food in a friendly setting are welcome.

I said that you cannot miss the event if you are in Western Japan. But it is not precise. Actually you cannot miss it if you are anything in the world and have a Wifi connection!
I am planning to run the full event on FACEBOOK LIVE with talks, live music, interviews, and yes! you can ask questions and have them answered!
It is my first time with Facebook live and I am not sure how it will go but if you are awake between 10:00 ~ 14:00 JST join us!
I am not sure if I can run the live from the bartok design facebook page or if it will run from my personal page, anyway here are both URLS just in case: 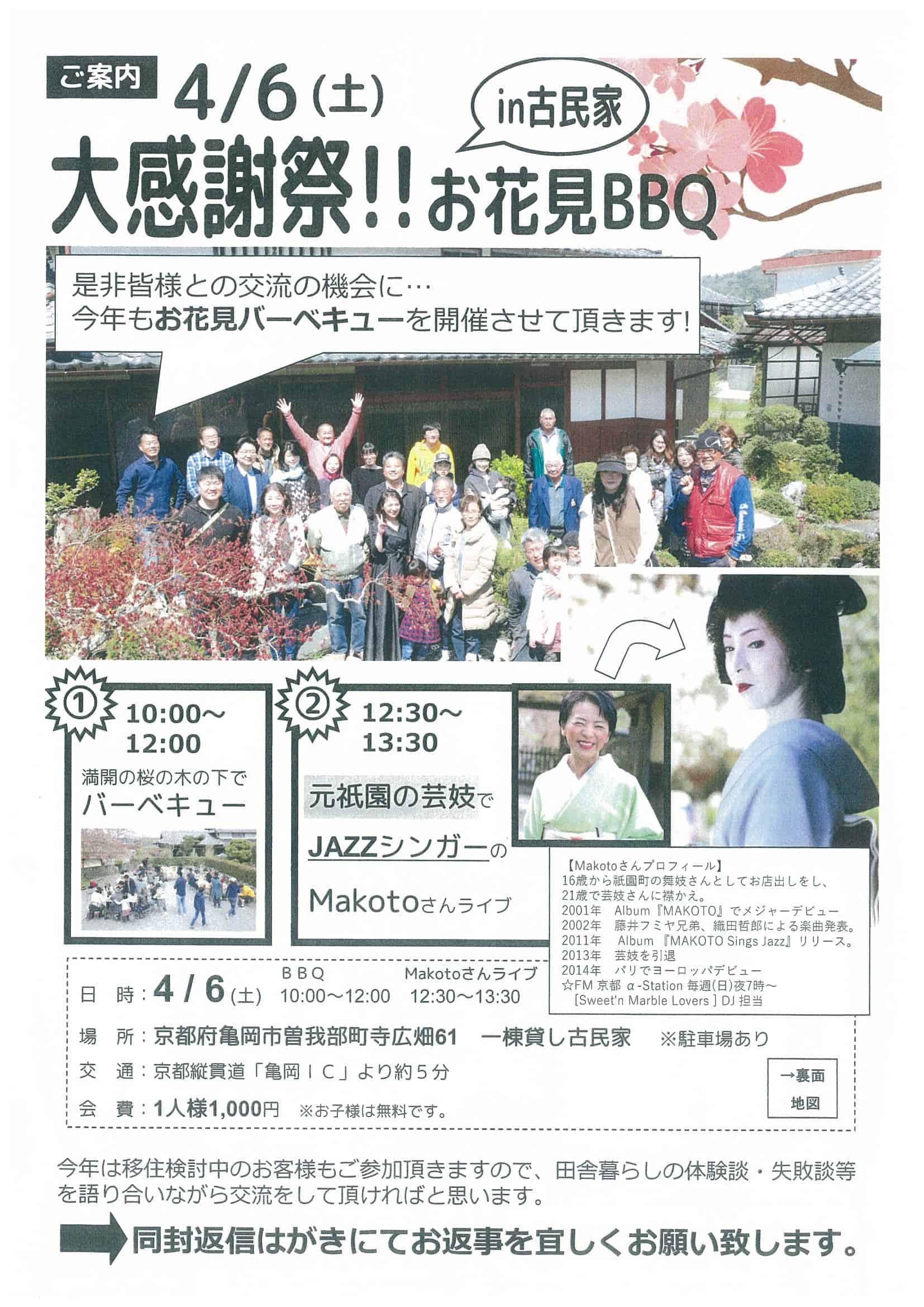